Anna Royzner, a Ukrainian Jewish, learned stories of shtetl life from her grandparents and heard harrowing tales of her family’s survival. In 1981 she graduated from Zhitomir  Pedagogical Institute with a degree in foreign languages. She has been teaching English for over 30 years in a secondary school, while at the same time researching and studying Jewish Ukrainian history. 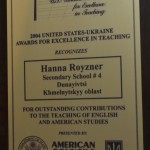 She has lectured on Jewish history, the Holocaust, and Jewish tradition and  in 2004 she was cited for “Outstanding Contribution to the Teaching of English and American Studies” by the American Council in Ukraine. In 2011 she was a speaker at the 31st IAJGS  International conference on Jewish Genealogy in Washington. She is also an interpreter/guide, who for 15 years has been accompanying  Jewish people seeking their family roots.  As a research coordinator, she and her team scour regional archives seeking Jewish records.

New Views: Agricultural Colonies and Shtetls (from the presentation at Jewish Genealogical Conference in Washington)

With growing accessibility to the archives of Ukraine, researchers have discovered new records detailing the origin, development, daily lives and outcomes of Jewish agricultural settlements in what was once Southern Russia. Many believe these colonies were the forerunner of the kibbutzim movement. From these new records emerge the struggles and triumphs of these colonies, the families who toiled in them and the movement of Jews from towns to settlements and, often, back again.

New information also has surfaced detailing daily life in the shtetls, where Jews created fire brigades, theaters, schools, and synagogues. As a researcher and translator, I want to tell the stories – along with photos – of these Jewish societies and discuss how their records are accessed.